The Merry Cemetery of Sapanta, a world-famous tourist attraction (VIDEO) 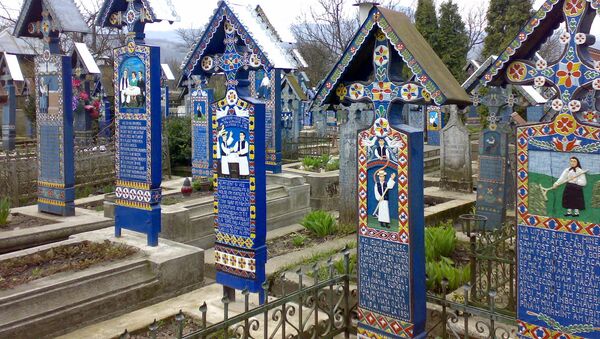 The Merry Cemetery is located in Sapanta, Maramures county, and was founded by a folk craftsman from Maramures, Ioan Stan Patras, a sculptor of tombstone crosses. How has this cemetery become a world-famous tourist attraction.

BUCHAREST, 28 aug — Sputnik. The Merry Cemetery is placed in an area where a thriving wood civilization has developed, in the heart of Maramures county, in Sapanta village, and it has become famous for its vivid colored tombstones.

The founder of the cemetery is Ioan Stan Patras, a sculptor of tombstone crosses and a folk artisan, born in 1908, in a family of craftsmen from Sapanta. It is said that Stan Ioan Patras was inspired by the Dacian culture. Dacians regarded death as a joyful event and a transition to a better world.

The epitaphs inscribed on the vivid-colored wooden crosses are short versified texts about the lives of the deceased, being witty depictions, often with a touch of irony. The craftsman, who was also a folk poet, praised the virtues or criticized the flaws of the departed.

The naive bas-relief paintings on the crosses illustrate scenes from the life of the deceased (some of them depict how that person died), and we can also see many traditional decorative motifs, among them the most common being the solar motif.

Over time, Ioan Stan Patras' successors continued his work, and today more than 800 of such crosses, carved in oak wood, are in this cemetery. Therefore, the cemetery became an open-air museum and a world-famous tourist attraction.

Since I was a little boy
I was known as Stan Ion Pătraş
Listen to me, fellows
There are no lies in what I am going to say
All along my life
I meant no harm to anyone
But did good as much as I could
To anyone who asked
Oh, my poor World
Because It was hard living in it

Under this heavy cross
Lies my poor mother in-law
Three more days should she have lived
I would lie, and she would read (this cross).
You, who here are passing by
Not to wake her up please try
Cause' if she comes back home
She'll criticize me more.
But I will surely behave
So she'll not return from grave.
Stay here, my dear mother in-law!