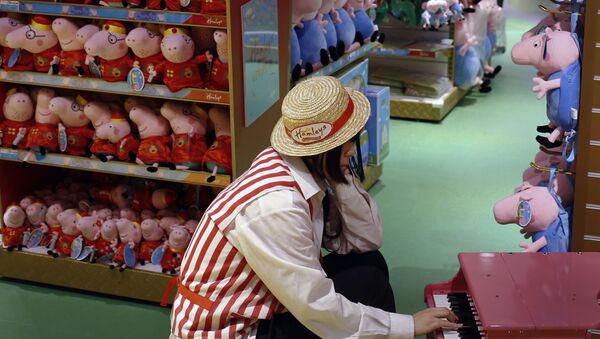 US parents have reported a mysterious phenomenon affecting their toddlers who have begun speaking in unusual accents. Researchers now believe they have tracked the source of foreign influence: Peppa Pig.

BUCHAREST, 13 feb - Sputnik. Peppa Pig is a popular children’s TV show about a forever-young, female pig and her animal friends, all of whom speak in British accents as they adventure around a fictional town in the United Kingdom. The show boasts over seven million YouTube subscribers. Reports of the so-called ‘Peppa Effect’ have been flooding in from parents across the US.

“Up until the age of 20 months, my daughter was a pristine developmental specimen, untouched by screen-time. Then we flew to Australia,” Janet Manley, a mother of two, who coined the name, wrote for Romper.

“After 21 hours of flight time spent binge-watching Peppa Pig episodes on the iPad, my kid had adopted Peppa Pig’s plum British accent, calling me ‘Mummy” and finishing her sentences with Peppa’s trademark snort… call it the Peppa effect.”

Perhaps Dick Van Dyke should watch Peppa Pig so that he can atone for his awful Cockney accent in Mary Poppins? #PeppaEffect

The most entertaining aspect of my life right now is that my toddler has been watching Peppa Pig and now speaks with a British accent.

Today is this little man's birthday! It's officially ends the "we have babies at home" era

Best thing that Noah does these days is speak in a British accent b/c of Peppa Pig. 2 days ago, he came to me, & said "Daddy, I want to sit on your lap and use the computer"#PeedMyPants pic.twitter.com/tLWxd954U0

Yeah I can vouch for the #PeppaEffect in our house. Tayla absolutely lapses into a slight Brit accent and vocabulary, and uses the word "straightaway" more than I ever have in my life! 😜.

"Daddy, when we get home do I have to go to bed straightaway?" https://t.co/VOiMiJugtr

My youngest son has recently become obsessed with Peppa Pig and has even adopted a fake British accent. Confession: So have I. Good night! Snort snort! pic.twitter.com/9QJMUC0V7s

Yeah I can vouch for the #PeppaEffect in our house. Tayla absolutely lapses into a slight Brit accent and vocabulary, and uses the word "straightaway" more than I ever have in my life! 😜.

"Daddy, when we get home do I have to go to bed straightaway?" https://t.co/VOiMiJugtr

The #PeppaEffect is a thing!

What else can explain why I spend most mornings humming the baked bean song? 😄https://t.co/6JMtYnzYra

​British parents weary of their children growing up on American TV shows and adopting a variety of American slang and twangs to their accents will take a certain satisfaction that, through Peppa Pig, British TV is now returning the favor.

In yet another amusing twist in the tale, it appears the Chinese may have foreseen the potential ‘threat’ posed by the ‘Peppa Effect,’ some time ago, as images of the pink swine were mysteriously banned on video-sharing website Douyin in 2018, according to RT.