The signal sent by Putin to the world, about the anti-missile system in Romania 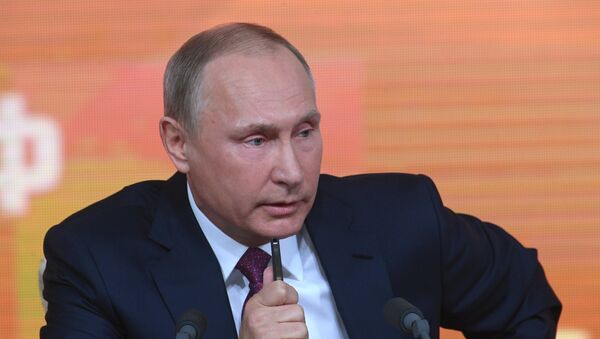 The US is apparently creating grounds for the withdrawal of the country from the Intermediate-Range Nuclear Forces Treaty (INF), and the Aegis system in Romania can easily be replaced with medium-range missiles, Vladimir Putin said at the Annual Press Conference held last Thursday.

BUCHAREST, Dec. 18 — Sputnik. Asked by Sputnik to comment on Vladimir Putin's Thursday statement, the political analyst Dragos Dumitriu has suggested that we can already see the light at the end of the tunnel as regards the tense international situation.

"In my opinion, we are witnessing the appearance of the first ray of light in the ever-darker world of international tensions. For the first time, we do not hear the answer ‘we are going to take similar actions in response,'" the analyst said.

He added that Putin's mature statements and decisions can lead to a different attitude concerning international relations, other than the warlike approach.

"Putin has accustomed us to his mature positions, he has won on points both on the battlefield and through his interesting geopolitical maneuvers. Actually, he is now leaving the US warmongers become targets of public contempt, as people have got tired of tensions and arming — and he is giving a strong, reliable hand to those who want to reconfigure the world map basing themselves on the principles of openness, and mutual interest — not on dictates imposed by the force of missiles", Dumitriu pointed out.

„It doesn't mean that Russia isn't going to invest in military research and production or in measures to secure her territory — but the main point is this: Russia is doing this within the boundaries of her territory, not by occupying other countries through perverse means — that is, through „democracy, anti-corruption, fight against terrorism" — in order to establish military bases on these territories and control them as being veritable colonies in terms of both decision-making and resources," the analyst added.

Dragos Dumitriu says that today's position of Russia could mean "the beginning of the end of the Cold War".

„In conclusion, the statement made by Putin today may mean the beginning of the end of the new cold war devised in the America's Deep State laboratories," he concluded.

At the Annual Press Conference, Vladimir Putin said that the US is apparently paving the way for the withdrawal of the country from the Intermediate-Range Nuclear Forces Treaty (INF), and the Aegis system established in Romania can easily be replaced with medium-range missiles.

Putin declared that the US is spending much more money on the military than Russia.

„We're spending $46 billion on the military," the president said. He noted that the USA's military budget is about 700 billion dollars.

The head of the Russian Federation affirmed that the US is „playing dangerously", referring in particular to the anti-missile defense systems established in Romania.

"They have deployed their anti-missile systems in Romania. They have delivered their Aegis Combat Systems, while it is possible to easily replace interceptors in these systems with medium-range missiles. If they continue in the same manner, nothing good will come out of this. We are not going to react in the same way, we will abstain," Vladimir Putin stressed.

The conference held on 14th December is the 13th Annual Press Conference of Vladimir Putin. The comprehensive press conferences, attended by both Russian and foreign journalists, have taken place since 2001. Putin has organized the event each year from 2001 to 2008, except in 2005. After his re-election for the third term, he has held the annual event since 2012. The Thursday Press Conference was the last to be held during Putin's third term.

This year, the number of journalists accredited for the event exceeded the last year's record, with 1,640 journalists being accredited to attend the Russian President's conference. Along with journalists from the Russian regions, reporters from the USA, Germany, Japan, France, China, Poland and other countries were also present at the event.