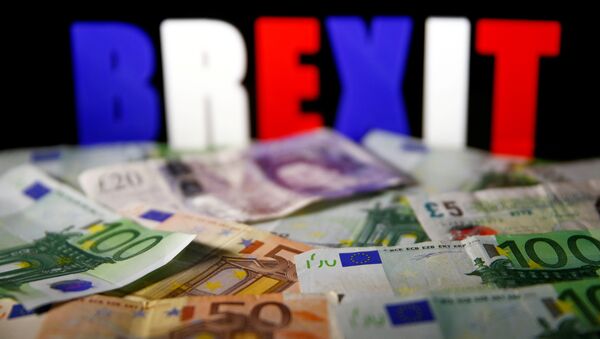 The Brexit headwinds are hitting both the UK and the EU economies almost equally as hard, but the continent has a major advantage in the standoff – the vast labour resources and industrial capacity of Eastern Europe.

BUCHAREST, 12 sept — Sputnik. Kristian Rouz – Amid the ongoing Brexit negotiations, EU economic growth is outpacing that of the UK, however, the economic headwinds facing the continent are hardly less severe than those across the English Channel.

While Germany is facing increasing competition from the US in the exports segment, and the disruptions in the traditional economic ties between the UK and the continent are affecting EU growth, the latter is becoming increasingly reliant on the economic expansion in its easternmost part.

EU growth is still projected to outperform the previous predictions this year, at above 2 percent, while the estimates for the UK range between 1.6 and 2 percent. However, in the second quarter, the EU economy grew by a revised 2.4 percent, as growth in Romania stood at a stunning 5.4 percent, while that in Estonia and Slovenia was 5.2 percent year-on-year.

The Eurozone’s economic growth has exceeded its pre-debt-crisis levels, driven by the latest developments, and the stronger figures will allow the European Central Bank (ECB) to start removing monetary stimulus policies and wrap up its asset-purchase program. These policy expectations come in line with the US tightening cycle, and will likely offset the most severe negative consequences of the supply-side reform in the US for Europe.

Romania is driving the economic expansion because of the massive expansion in its manufacturing, as German enterprises head south to take advantage of the cheap labor closer to the eastern borders of the bloc.

“It is solid economic growth, generated by a strong 8 percent expansion of industrial production and from services. A significant contribution comes from sectors with medium and high value-added, such as high-tech,” Romania’s Prime-Minister Mihai Tudose wrote.

Eastern Europe and its consumer and labor markets give the EU a competitive advantage over the UK in the Brexit negotiations process, as the UK’s foreign-trade pivot to its former empire is lagging amid political uncertainty and indecisiveness.

However, the Brexit process is affecting EU wages, as well as the sectors of its economy which are most exposed to the international headwinds.

"The risk that we can address is the lack of structural reforms," EU’s economic chief Pierre Moscovici said. "It's not when things are getting better that we need to stop reforms – on the contrary, it's the moment you should seize [the opportunity] to do what's necessary."

The EU is thus moving closer towards establishing a fiscal union, allowing it to coordinate its budget spending across the bloc, thus more effectively addressing future economic challenges. However, such a reform would require a lengthy process of coordination.

French President Emmanuel Macron, one of the most prominent proponents of greater unity within the EU, said that the bloc could also establish a proper monetary union, based on the existing architecture of the European Stability Mechanism.

“We should head toward a European Monetary Fund but this should in no way be mixed up with the budget,” Macron said. “Are you afraid of a European ambition that will enable us to win back our sovereignty, our democracy, our confidence? Have this crazy ambition. I promise you we will succeed.”

Such measures would allow the redistribution of growth capacity across the bloc, allowing the more efficient use of the labor resources of Eastern Europe, and the achievement of a quicker pace of economic expansion in the future.

Meanwhile, Germany is expressing concern over the ECB’s massive asset-purchases of the past years, which have bloated the regulator’s balance sheet and concentrated a significant amount of wealth in the hands of the governing body.

The ECB’s policy is tantamount to the “biggest expropriation since the Soviets forced de-industrialization in Germany after World War Two,” Gabor Steingart of the German business publication Handelsblatt, wrote.

While concerns that the Eurozone and the broader EU are becoming a planned economy are rife, the economic projections are rosy so far, with the continental economy accelerating to its quickest growth rate since 2007 this year. However, it is poised to slow over the next two years, focusing, even more, attention on the issue of wider structural reform.